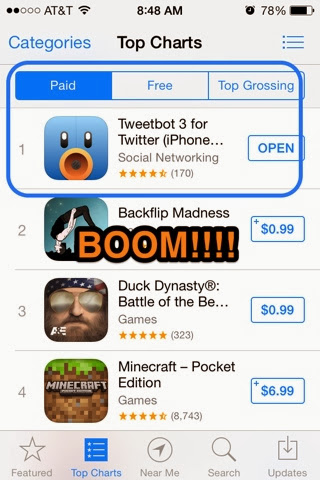 In the battle of the “birds” (pun very much intended!) Tweetbot has dethroned Duck Dynasty as the top paid app in the US!

At least for now that is!

Note: Yes, I’m aware that there is more to Duck Dynasty than birds but then again I don’t really watch the show so 😛

If you haven’t downloaded Tweetbot yet, or did previously & deleted the app before the latest & greatest update (3.1 last I checked) you might want to give it a second look.

Although Tweetbot’s UI is much more “crowded” than the Official Twitter iOS App, it does boast a few useful features lacking (& sorely needed) in the official app which include:

Hopefully the Tapbots team will generate enough spare cash from Tweetbot’s success to begin updating their other neglected apps (& no, I don’t think that will include Netbot).