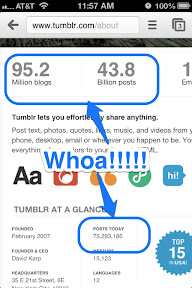 Have you seen the latest Tumblr stats?!

Yes, I know some people will say “Yeah, but WordPress powers 30% of the web!” (stats which I highly dispute as not even Google has indexed half the web, especially in web savvy 3rd world countries)

But it’s very difficult to track every installation of an open source CMS/blog software as there is no “tracker” installed upon every WordPress website.

I’m not sure how many Blogger/Blogspot has, but it’s probably not as many as WordPress.com (who I think is firmly in second place). 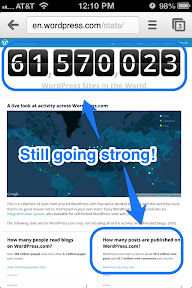 Note: It’s interesting how Tumblr produces more posts in a day than WordPress.com does in a month!

Years ago Tumblr use to be a place for teenagers to hide away from their parents on Facebook.

Now I’m seeing everything from federal government departments to celebrities to businesses power their site through Tumblr (the latter which is becoming surprisingly popular).

I’m not sure how long Tumblr can sustain their popularity but as their presence increases we will probably see more developers create businesses around it.